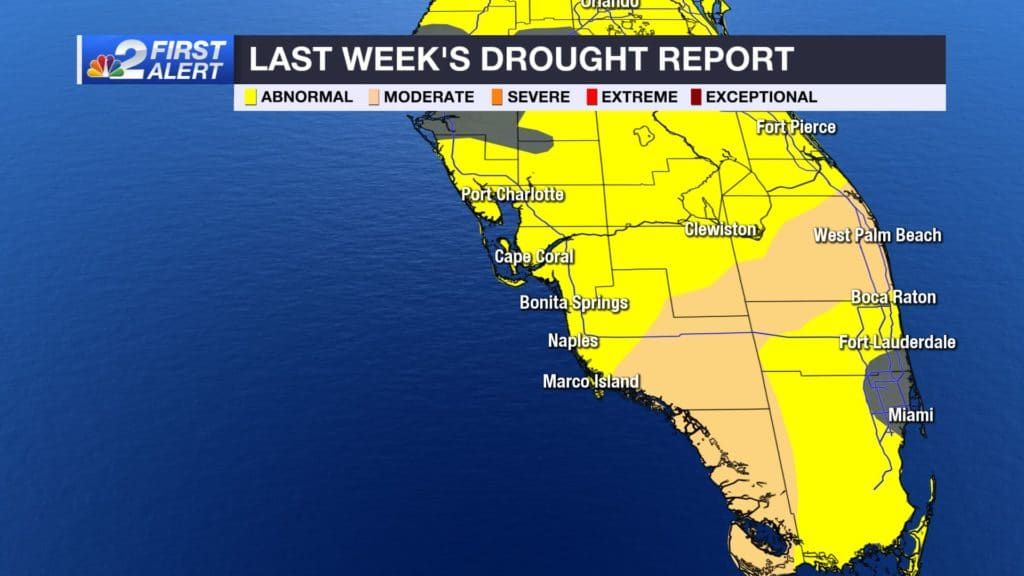 Each Thursday, NOAA in conjunction with the National Drought Mitigation Center [NDMC] at the University of Nebraska-Lincoln and US Department of Agriculture release a report on current drought conditions across the United States.

Despite copious amounts of rainfall from this past weekend’s cold front, this week’s drought report remains unchanged from last week.

The lack of change in the drought report this week may come as a surprise to some considering the soaking rains from the weekend.

Fort Myers alone picked up over 2 inches of rain, with higher amounts reported elsewhere.  However, rainfall isn’t the only factor that goes into developing the drought monitor.

The level of drought is calculated using a wide variety of data including, but not limited to, the Keech-Byram Drought Index for fire, satellite-based assessments of vegetation health, and various indicators of soil moisture.

The organization responsible for producing the report stated that showers and thunderstorms from the weekend helped to prevent worsening drought conditions across South Florida but weren’t enough to eliminate the 1.5 to 4 inch deficits that exist.  Because of this, moderate drought conditions were maintained across Collier County, with abnormally dry levels elsewhere.