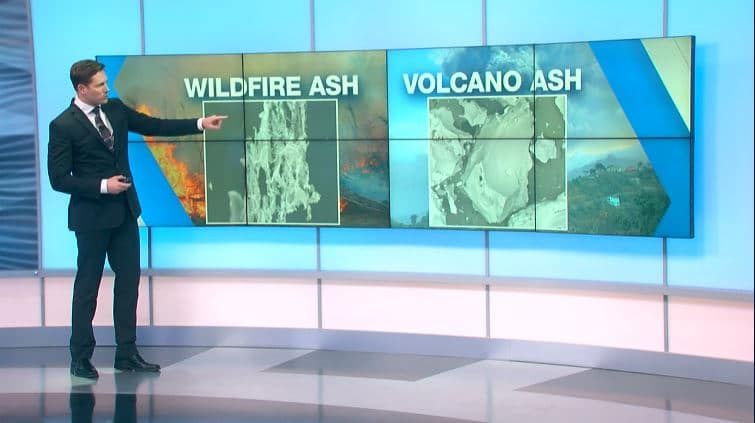 How and why is volcano ash different from wildfire ash?

Friday marks one week since the start of the eruption of La Soufrière, a volcano on the island of St. Vincent in the Caribbean Sea. Over the course of this past week, ash has been blown more than 5 miles into the air, before raining down on St. Vincent and nearby islands like Barbados. The ash from the volcano is increasingly becoming a humanitarian crisis, as reports place some 20,000 people as being displaced right now. You can learn more about what’s happening on St. Vincent with the ongoing eruptions from NBC News here.

When you see video of the volcano’s ash, you might be curious as to how it is different from the ash plumes produced by wildfires we have in Southwest Florida. Because even though both are ash and spread by the wind, their differences outnumber their similarities.

Let’s start with what makes up these two types of ash. Though with time both can turn into fertile soil, volcanic ash takes longer to be absorbed into the Earth than wildfire ash. This is why areas experiencing big wildfires (like the Picayune Strand area of Collier County in years past) can see new growth within a few years. That’s much faster than areas in the wake of a big volcano. If enough volcanic ash falls it can take more than a decade in some cases for that ash to turn into soil and allow plants to grow. In fact according to the United States Geological Survey (USGS) as little as 1/4″ of volcanic ash can damage crops.

Speaking of plants, that plays a role of distinction as well. When wildfires burn, organic plant material from grasses, bushes and trees is what forms into the ash we see during wildfires. Volcanic ash on the other hand is actually made up of rock and glass fragments making it rough and coarse instead of being light and fluffy like wildfire ash. This makes for a major difference in the density between wildfire ash and volcanic ash. The comparatively less dense wildfire ash pieces pale in comparison to the dense volcanic ash particles which can become very heavy. According to the USGS, a few inches of ash over a square yard can weigh as much as 200 pounds. And get this, if volcanic ash gets wet its weight can double!  This can be a major problem for areas in the aftermath of a volcano, as the weight of falling and accumulating ash can compromise the structural integrity of structures, similar to how heavy and wet snow can bring down a roof in wintertime.

When pieces of ash are put under a microscope, more differences become apparent. In the image below from NBC2 News Today’s morning broadcast, you can see how compared to the wildfire ash, a microscopic view shows volcanic ash has a different structure with sharper and better defined edges. This ties into the health aspect of ash of all types. You never want to breathe in ash from a nearby wildfire because those particles can get into your respiratory system and essentially coat the inside of your lungs. Volcanic ash will do the same, but because of the sharper edges, do even more lung damage tissue damage.

The impacts of large volcanic eruptions can scar Earth’s landscape for a longer time than a wildfire. An example of that is the Valley of Ten Thousand Smokes in Alaska. In 1912, the Novarupta volcano eruption occurred and was far larger than the 1980 eruption of Mount Saint Helens in the continental United States. As late as 2019, strong winds were able to loft enough leftover volcanic ash from that eruption to be picked up by satellites orbiting Earth! You can learn more about this piece of volcanic history here.

The post How and why is volcano ash different from wildfire ash? appeared first on NBC2 News.