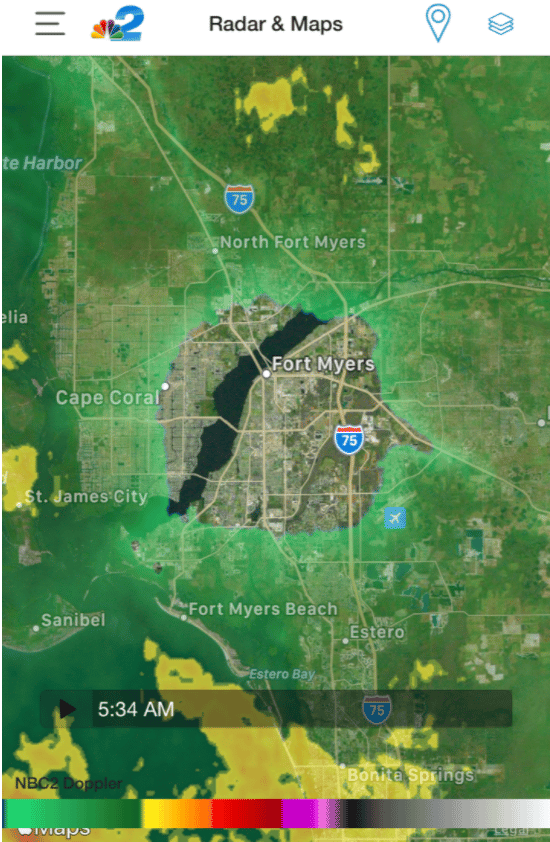 FORT MYERS, Fla. – If you watched NBC2 on your television this past weekend for a storm update or checked the radar on the NBC2 Weather App, you probably saw something like the picture below.

There looks to be a loss of data right over Fort Myers and part of Cape Coral. This is called the “cone of silence” and it happens with all radars. A radar spins 360° in order to see all around it, but it also tilts up to see into storms— but radars can only tilt as high as 19.5°. Since radar does not point straight up, a “cone of silence” develops where the radar cannot see rain.

Recently, the NBC2 First Alert Live Doppler underwent a major upgrade! It now transmits at a higher power than before, so we see rain and storms even better. If you looked at our radar on the app over the weekend, you noticed the cone is more defined…and much smaller. Instead of a loss of data over much of a large part of Fort Myers, now the cone is just over 2 miles wide. This smaller “cone of silence” means that our radar can now see more of Fort Myers and the surrounding areas.

The NBC2 First Alert Live Doppler Radar is a big deal for us in Southwest Florida: it’s the only one in this part of the state and covers a radar gap left from the ranges of the National Weather Service radars out of Tampa and Miami. The maximum range of these radars would seemingly cover Southwest Florida well, as you can see indicated by the white circles in the graphic below.

But radar beams don’t fly straight! They bend up into the atmosphere, and by the time those beams reach Southwest Florida, they’re tens of thousands of feet off the ground, and can sometimes underestimate, or even miss, rain at that max range.

Because of that beam bending, a more accurate depiction of the best radar coverage from the Tampa and Miami radars would be the picture below.

That radar coverage gap is where we come in with the NBC2 First Alert Live Doppler Radar. We still utilize our partners at the National Weather Service’s radars, but by placing our radar in the gap, we now have a three radar network to better help you prepare for rain and potentially bad weather.

Now with the power of the upgraded NBC2 First Alert Live Doppler Radar, you have another reason to count on NBC2!